[Following is an official OnlineBookClub.org review of “Armless Hugs” by Jim Meehan.] 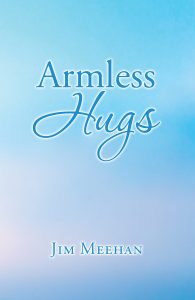 If you have ever been unable to embrace someone you love because you are physically or emotionally separated by illness, a job, or other circumstances, the title of this book would surely capture your attention. Jim Meehan penned the titular poem over twenty years ago to articulate how it felt when he would return home late at night after one of his many business trips and find his wife and daughter already asleep. His emotions would be conflicted—he longed to embrace them but did not want to disturb their rest. With separation so prevalent during the current pandemic, Meehan has published this poem and others in a collection entitled Armless Hugs.

This compilation of fifty-eight poems is divided into two parts. The first part focuses on relationships, while the second part addresses life in general. The compositions are short and use unobtrusive alternate and couplet rhyme schemes. I do not read poetry often, but I appreciate this genre because of the stylistic freedom and the artists’ ability to communicate so much in so few words.

The offerings in part one include sage advice for parents in “Teenagers Are Tops” and an interesting take on a life-giving transfusion in “Love Donors.” Part two contains musings about topics such as what matters most in “Priceless Values” and defining humility in “More or Less.”

Besides being a poet, Meehan is a positive psychologist and a scientist, and I enjoyed the times when his areas of expertise intersected. An example is “Now or Never,” where the author contemplates the duration of “now.” This poem made me think about the universality of “now.” It doesn’t matter what time it is halfway around the world; at any given moment, it is “now” here and there. Then the scientist continues and literally brings the reader back to Earth with this mind-bending line: “When we look at the stars we are looking at the past.”

My favorite poem is “Picture a World.” Inspired by the work of Meehan’s psychological mentor, Dr. William E. Hall, it painted the picture of a world where every man, woman, and child was fully engaged, doing the “good things they were good at.” They knew their skills and strengths and were using them and strengthening them for the benefit of the world and themselves. It took my breath away to imagine such a place. He described the look in their eyes—the sheer delight of doing what they love. That would be paradise! The song “Imagine” by the Beatles describes a peaceful world without boundaries, but this poem takes that peaceful world to another level.

Interestingly, my least favorite poem in the book is the one about the aforementioned Dr. Hall: “A Most Remarkable Man.” It described Dr. Hall’s work in identifying talent and helping people achieve their highest potential. It was an interesting topic, but it did not flow well. I was inclined to read it as prose, but having it break into lines and stanzas kept interrupting the thought. It felt forced and out of place.

In deciding my rating, I initially considered factors such as the number of poems I liked and how the writing flowed. In the end, I kept only one metric: how the poems affected me. Can you put a number on inspiration? I guess I just did. I rate Armless Hugs 4 out of 4 stars. Allowing for poetic license, I found only two minor grammatical errors in the collection. I recommend this read to anyone who enjoys thought-provoking inspiration. The poems are short and simple but deep in meaning. There is neither profanity nor erotic content in this compilation; it is appropriate for all ages, but adults will relate best to the topics.